For those not familiar with Sosa Stradonitz, it is an improvement on the Biblical patrilinear only genealogical system. Sosa, the earlier inventor, was actually a Franciscan arguing about genealogies of Our Lord in Matthew and Luke : while several between King David and Our Lord are same generation, they are different "ancestry numbers". You don't have ONE grandfather, you have TWO, and unless you are grandchild of Adam, or product of incest, they are different people. This system has "the person concerned" as number 1, any father of any person n as 2*n, thus father of person concerned 2, paternal grandfather 4, any mother of any person n as 2*n+1, thus mother of person concerned as 3, maternal grandmother as 7. This means, parents are 2 and 3, grandparents 4 to 7, great grandparents 8 to 15 ...

But here we get to the generations which were certainly born before industrial revolution started improving things, though not all before it started deteriorating things:

Obviously, among the Great-Great-Great-Great-Grandparents, 64 to 127, many are missing. Even more from the previous generations. But those who are there were not included in the known part because they had exceptionally long lifepans.

And, this will involve some with known lifespans, though in two cases there are two alternatives about birth years. This will leave median unaffacted, but will differ upper and lower quartiles a bit. Here we count the known lifespans:

As Theodore is a fan of Monarchy - and so am I with historic at least monarchy - it fairly well matches ancestry of Louis XVI or of Marie Antoinette.

PS - Links were inserted at the names of Louis XVI and Marie Antoinette in above text./HGL
Posted by Hans Georg Lundahl at 7:56 AM No comments:

For those who Believe in Computer Linguistics


Do you also believe this priest is called Fr Anthony Chicana? 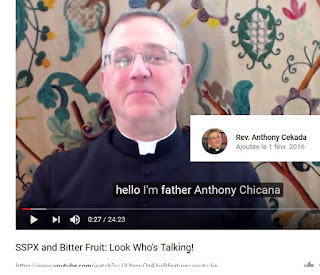 I'd have thunk it was Cekada, right?/HGL
Posted by Hans Georg Lundahl at 6:23 AM No comments: 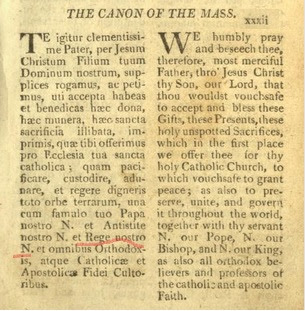 Belgium under the late King used to have this insertion. It was the man who abdicated for one day instead of ratifying abortion.

Now, why would England get this in a Missal, when its Kings were heretics and known to be such?

In 1806, under George III, this line was certainly omitted. One was probably hoping that George IV would publically convert, which would have implied the right and for a priest obeying that order from Rome even duty to read the line. It is possible that George III opposing Napoleon and abolishing slavery was taken as a hope of his converting himself, and George IV married in secret a Catholic woman, whom later he repudiated.

So, the answer was perhaps as simple as : Rome was hoping for a Catholic monarch in England.

It is also possible that some were reading "together with our King Henry Edward" - the last direct Stuart claimant actually was not just a Catholic, but a Catholic priest and Cardinal of the Roman Church. He is buried in the Vatican, in St Peter's Basilica.

"But in any event, as regards the priest’s altar Missal itself, the liturgical commentators are clear: The Missal of Pius V discontinued the mention of the king or civil rulers in the Te Igitur, and the practice was allowed only by way of privilege (as in Spain and Austria), where the ruler was a Catholic."

Obviously, an English King converting and risking his throne to be Catholic would have been worthy of that privilege. We can count on the privilege having been granted beforehand to automatically be valid from the day an English monarch was again Catholic - or of Stuarts, like Henry Edward, enjoying it./HGL
Posted by Hans Georg Lundahl at 5:33 AM No comments:

I think, this year, I'll have to plead a Swedish or Lithuanian week, Monday to Sunday. Pirmadienis, sekmadienis ... and in school we were taught week days otherwise in Sweden from in Austria.

God bless some of the Muslims I have met, but I can't say their religion is the true one!

Tolkien liked Roy Campbell, and probably approved of Carlism. So, why not mention a death in connection hereto:

Posted by Hans Georg Lundahl at 10:23 AM No comments:

There are Guys who Think Latin is an Analytic Language


I suggest they try to present Chinese as a Polysynthetic one, while they are at it, bungling language typology!

Do you know what I found? Well, first, what was I looking for? I was looking for "fishing" as in the trade practised by some of Christ's disciples on lake Genesareth. In order to contrast it with agricultura and commercium. I though piscatus could be the word, but wanted an online check to be sure.

You know what was the first hit? Or second after a totally irrelevant wiktionary hit on the Spanish and Italian word pesca, involving both the word for fishing and the word for persica, peach, which involved - unlike the relevant meaning of pesca - a reference to Latin.

Well, here is this second hit:

IDl : How to Say Fishing in Latin
https://www.indifferentlanguages.com/words/fishing/latin

And here is the explanation:

If you want to know how to say fishing in Latin, you will find the translation here. We hope this will help you to understand Latin better.

Here is the translation and the Latin word for fishing:

Check out other translations to the Latin language:

Piscandi is not a word, it is a word form. It is not a noun meaning fishing, it is a form of the verb "to fish", and it is the form which is the gerund in the genitive. Here is a way in which you can use it:

We were walking toward the river for the sake / in the intention of fishing.

Obviously, you can also translate the latter of the two as:

We were walking toward the river in the intention to fish.

Or even more fluently ... intending to fish.

But the context where I wanted "fishing" was not this one. I said "agricultura est forsan dignior piscatu inquantum securior" commenting on Cicero's words about agriculture. And I said Cicero's preference of agriculture over fishing is doubtful, due to apostles being fishermen, but if it is in any way true, it is because of it being more secure to plow and sow than to throw your nets.

Well, in the sentence I used piscatu. This is a case form of piscatus, which is the noun for fishing, at least that would have been the noun for fishing or for fish catch if Spanish pescado is a good clue, which I hope it is, I did certainly find no better clue on the above site.

Now, if instead I had used "piscandi" I would have been wrong. Why? Piscandi means "to fish". But "to fish" is not translated piscandi in all contexts. The gerund is rivalling with the infinitive.

So here we have a full case declinsion of "to fish", singular only, since activities are no objects which can be counted:

Which of the forms could I have used to translate "agriculture is perhaps more dignified, since more secure, than to fish"?

In the first, but not the second case, I could also put quam piscare after dignior or securior:

But using a verb form for the comparison after a noun for the concept taking the comparative is as clumsy (or voluntarily quirky) in Latin as it is in English to say "farming is ...er than to fish" or "agriculture is ...er than to fish". English can use "fishing" not just as a participle, but also as a noun, meaning the second as well as the first can be amended to "than fishing". Latin cannot use piscandi as a noun in the nominative after quam or as a noun in the ablative of comparison. For a noun, comparable to "agricultura" you need a noun, like piscatus.

Do you know what the sad thing is? The guys behind the site IDl / InDifferent languages are doing this kind of thing, not just from English, but also from Spanish and from Russian. If they dared to mistreat Russian as much as they do Latin, they would be out of business fairly quickly with this site at least!

A few notes on above, to those not familiar with linguistic terminology. In linguistics, we distinguish two main directions of syntactic-morphological type, analytic and synthetic, with the former relying more on extra words and on word order, the latter more on endings or choice or stem vowels or such. English is more Analytic than Russian. Russian is more Synthetic than English. While Spanish descends from Latin, a documented fact, not just a reconstruction, though the details of the process can be disputed, Spanish is more Analytic and Latin more Synthetic. So, treating "piscandi" as "a word", a unit independent of context which is simply a unit, is treating Latin as an Analytic language which it is not, rather than as a Synthetic language which it is. I suggested, while they were at it, they could also try to present the extreme form of Analytic languages, the Isolating ones, like Chinese, as a Polysynthetic, the extreme form of Synthetic, and the real example of it would be Esquimeau / Greenlandic.

In Latin, the accusative is used both as a direct object and after certain prepositions. An infinitive is good for the direct object but in Latin unusable for accusative after preposition. "Volo" meaning "I want" can obviously take a direct object : volo panem, I want bread. Equally obviously, it can have an action as direct object, and that object is just as much as the subject behind est, an infinitive : volo piscare, I want to fish. To go cannot take a direct object. If I say "let's go fishing", English uses a form which started out as meaning sth like "let us go while we fish" or "let us go and be fishing at the occasion". In Latin it would be "eamus ad piscandum".

However, to express purpose, Latin has after the classical period borrowed a Greek usage, since Greek has no gerund, but uses infinitive for all cases. Hence, we can now, after Caesar, in Christian times, also say "eamus piscare".

But neither Classical, nor now, there is no going "piscandi". There is only an intent of piscandi. The site was simply wrong. Now, I will give them some feedback, and later you can check if they took notice or bungled on with a Latin they certainly are not qualified of mastering.

Or qualified to master.

PS, feedback submitted.
Posted by Hans Georg Lundahl at 12:49 AM No comments:


Douay Rheims:
[Actes 14:]
[22] And when they had ordained to them priests in every church, and had prayed with fasting, they commended them to the Lord, in whom they believed.

Avez-vous d'autres exemples?/HGL
Posted by Hans Georg Lundahl at 4:47 AM No comments:

"What sort of holy cause is it to inherit from our ancestors, that we should go on hating something and being consistent only in hatred; being fickle and false in everything else, even in our reason for hating it?"

New blog on the kid

"Complete archive" was being made available on ...

But it kind of slowed down.