Some Lessons on Imprimatur

Do you know how Chesterton defended the Catholic interference with liberty of writing and publishing? By the invention of printing, the act of effectively publishing a book had come into the hands which could affor the invenestment of a printer. This means, the Church was not shutting down a really democratic debate, but one which had taken quite a few notches to becoming an oligarchic one. Note, the advent of internet has changed the situation. The old rule, post-publishing approval or reproval by notified superiors is good enough. As it was for Bishop Tempier.***

PS, I forgot to mention another thing I had intended to, also due to fatigue. Some guys seem bent on giving me chances to reconsider myself what I wrote on some occasions. They spam posts, and some of them several times over. Or, one of them does. So, I have published two lists on essays I could have reconsidered and didn't find objectionable, they are called Spammers' Choice! / Choix des spammeurs and Spammers' Choice. While there is exactly one blogger profile, I think the action is a type of plot to "give me a chance" to reconsider - what I still think I considered very correctly./HGL

* Yeah, I just said I am a good Catholic writer. So, a penance for vainglory might be OK, but making it years and years of waiting to get published is not a penance, it is useless waste.

*** Some may know I have published on internet a Latin text and own footnotes on the condemned sentences by Bishop Tempier. It is an "English" copy of the work in which the condemned sentences are ordered by theme, as they were not in the original in Paris. Now, the first group of themes is "errores de deo", but this is chapter VI - which leaves the question what the first five chapters were. In the case of Tempier's original there were however a few known prequels, namely sentencing named authors after their publication - Boethius de Dacia for a work of Averroist tendency or Andrew the Chaplain for a work on love lore (relationship advice or seduction advice). Here is however the text of the syllabus: Index in stephani tempier condempnationes.
Posted by Hans Georg Lundahl at 4:47 AM No comments:

How Are Russians Reading my English by Google, if so? And What About Tower of Babel?


When I used google translate to translate a passage of the Coran - one I happen not to find objectionable, unlike much else in it - the French result of Arabic input was more or less gibberish.

I think this could explain why someone using Google Translate for Arabic output could also find the resulting Arabic gibberish. But I also said, this could happen with Russian or Ukrainean too. So, let's test it.

Next, let's chose a text which will not blaspheme if translated very badly (even if a machine translation translating badly can't blaspheme the Bible, just show the limits of the machine):

Note well, the Russian synodal version mistranslates verse 4. The google translate to English was not a mistranslation by machine.

The LXX, which would seem to be the original for Synodal version, does not make the same fault, it has καὶ πύργον οὗ ἡ κεφαλὴ ἔσται ἕως τοῦ οὐρανοῦ - and a tower, of which the top is into the heaven. This is consistent with the tower being a rocket and the top being step 3. The Russian Synodal translation does not translate these words literally, and its choice of interpretation is basically a "skyscraper" or possibly a skyline - which connects to two patristic interpretations of what the object was, but disconnects from the at least Augustinian (as well as Hebrew) interpretation of what it was for.

As to verse 9, I don't think Babylon need be considered a mistranslation.

Nimrod can have named Göbekli Tepe Bab-Ilu - gate of gods - just as successors of his named a city further south so. If Nimrod meant Babel as a quest to get to heaven by local motion in our mortal bodies, I think rockets make more sense than skyscrapers, even back then. And Bab-Ilu would have been a fitting name.

The point is, he would have succeeded with a rocket as badly as Leonardo if he had tried his own prototype airplanes. But Uranium as rocket fuel is not such a joke as one man falling from a tall house in a heavy box of wood with useless wings.

God preserved him from even trying, by making him incapable of communicating with his workforce. Imagine Putin at Sotchi and him asking a question and getting an answer like "yo no comprendo" because the other guy has by divine fiat started speaking Spanish instead of Russian. That is what happened to Nimrod, happily enough.

Why does the Bible translate so much better on google translate than the Coran? It is very simple syntax, very unrhetorical.

Not laden with figures of speech that don't correspond when translated (that said, where the Bible has a figure of speech, it is probably part of the culture of English or French already, unlike those in the Coran).

I might hope my prose translates better than the Coran, but I think it probably translates worse than the Bible. It is more rhetoric and more complex, therefore more sensitive to bungling translations.

This is one reason why I think Russians have been thinking my English is bad (even here, while it is understandable, the English is clumsier than Douay Rheims, like a foreigner retelling parts in children's language - especially "mix their language", though probably or at least possibly one method God could have used : mixing the Hebrew already there with a "sound change applier" or sth, and also mixing word meanings. But probably not the only one, though that could explain the existance of Semitic or Afro-Asiatic language family.

By the way, let's see if Ukrainean translates verse 4 better?

And they said: "Let us build a city for us, and a tower, and its summit up to heaven." And we shall make a name for ourselves, that we may not be scattered on the surface of all the earth.

Ah, yes, it does. "and its summit up to heaven". Step 3 is the summit of a three step rocket.

Did Popes Claim to Be God? No.


A just possibly correct Latin text, to the left, a false English translation to the right: 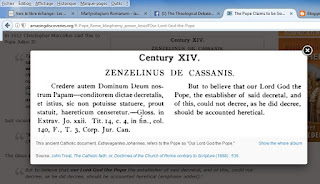 Quoted in John Treat, The Catholic Faith, or, Doctrines of the Church of Rome contrary to Scripture (1888) : 536.

"but to believe that our Lord God the Pope, the establisher of said decretal, and of this, could not decree as he did decree, should be accounted heretical."

A better translation (if the reference is genuine) is:

But to believe that our Lord God could not so constitute the Pope - author of said decretal and the other one - as he did constitute him, would be accounted heretical.

I am a Latinist.

This is one of the cases where Latin has some ambiguity, and some people are either incompetent at Latin or jumping to the reading which would damn papacy as papolatry./HGL

Beati mundo corde : The truth about the anti-Catholic charge of “Lord God the Pope”
https://klaravonassisi.wordpress.com/tag/lord-god-the-pope/

I found it after publishing above. I copy the conclusions:

In other words, possibly even the quote by John Treat is a fake, possibly the Paris edition inserted sth meaning sth else, like what I translated. If it is a fake, 1685 is a year in which Protestants, Gallicans and Jansenists were already around and eager to smudge the Papal supremacy in the Church for diverse reasons (heresy in Protestants, patriotism of exaggerated and misplaced type in Gallicans, heretic opinion verging on and leading later to schism in Jansenists). So, there is nothing totally improbable in it being a fake./HGL
Posted by Hans Georg Lundahl at 8:04 AM 2 comments:

Which one is from Codex Vaticanus?


I found the first one on a video about 666 trying to link it to Muslims.

I found the second one on a wikipedian article on Codex Vaticanus. 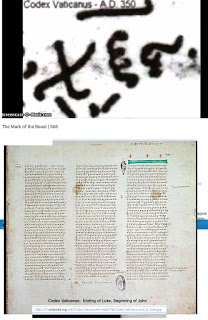 It is very possible that Codex Vaticanus is a very early one, and is from 350 AD, it is according to wikipedian article from 4th C.

It is NOT very probable that Chi - Xi - Stigma look as above version in it, since the type of letters only came around much later, Codex Vaticanus being an Uncial Codex and the above version being a minuscule lettering and the succession of Greek writings being, as for Latin, Majuscule, Uncial and Minuscule.

How exactly do Chi and Xi look in Uncial?

Found in Antiquity : How to write Greek Uncial
Posted on March 31, 2014 by Carla Schodde
https://foundinantiquity.com/2014/03/31/how-to-write-greek-uncial/

In the video, there are no ligatures, just the alphabet. Stigma is lacking.

However, since Omicron is directly after Xi and Omega after Chi and Psi, here are the Greek letters for 60 and for 600: 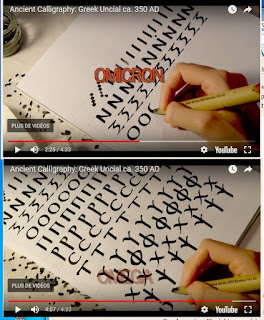 Especially the Uncial Xi is not very like the Minuscule which can be turned around for relooking like Arabic letters, is it?

And the Minuscule is not from Late Antiquity, but from Middle Ages./HGL

Posted by Hans Georg Lundahl at 9:46 AM No comments:

New blog on the kid

"Complete archive" was being made available on ...

But it kind of slowed down.